The latest online teeth whitening rage is HiSmile, which contains sodium bicarbonate. The compound sodium bicarbonate, or baking soda, is a mild abrasive. Abrasives can only lighten teeth by removing surface stains. Most toothpastes are more abrasive than baking soda and are more effective at removing surface stains; however, some toothpastes can be too abrasive and can abrade your teeth.

Most tooth whiteners contain carbamide peroxide or hydrogen peroxide. They whiten teeth by penetrating the enamel surface and oxidizing the stain. This is a chemical reaction. HiSmile containing baking soda cannot do this, despite what any paid celebrity tells you. Carbamide and hydrogen peroxide have been routinely used and FDA-approved since 1989. Whitening teeth in the dental office has been performed since the early 1900’s. There are different systems available. Some use a laser, some use a special light, and some just the solution itself. They are equally effective. Aging teeth can become yellow or stained brown, but are often the easiest to lighten. Fillings, crowns (caps), and fake teeth will not lighten. A teeth whitening treatment usually takes about one hour. A solution or gel of 30 percent to 40 percent of hydrogen peroxide is applied to the teeth, several times. Compared to home tray whitening, office whitening gives faster initial results, but is not more effective.

Home tray whitening has been performed for millions of people. We have been providing this procedure at Delmarva Dental Services since 1989. The technique involves making an impression of the teeth and pouring a stone model. From this model, a form-fitting custom tray is made. A whitening gel is placed in the tray consisting of 10 percent to 22 percent carbamide peroxide or hydrogen peroxide. The tray is worn for several hours during the day or overnight. The higher the percentage of gel and the longer the tray is worn, the better the results. Temporary cold sensitivity or sore gums can result occasionally. Reducing the length of time the tray is worn can alleviate this. Yellow and brown stained teeth due to age are the easiest to whiten. Fillings, crowns (caps), and fake teeth will not lighten and may have to be redone to match the lighter surrounding teeth. Improvement is usually seen immediately and best results after about 7 days. The teeth remain lighter for several years but will slowly darken, requiring some touching up to maintain your selected shade.

Home tray whitening is the method where you put whitening gel in a tray and place the tray in your mouth. The gel is usually different concentrations of carbamide peroxide. The tray is typically worn for 30 minutes to several hours a day. It takes about one week to see results. Whitening trays have been popular since 1989. They are a very effective method of whitening provided that you use a custom tray and not a premade “stock” tray. A custom tray is made when an impression or mold is made of your teeth in a dental office. It has an excellent fit and does not dislodge easily, keeping the bleaching gel in close contact with the tooth surface. This is not true of stock or premade trays purchased in the store or over the internet that are made to fit anyone. All bleaching trays are not alike. It fits much better than whitening strips, especially where the teeth are crowded and not aligned where it would be hard to adapt a strip. It is also better than a whitening strip on the lower teeth because it is less likely to be dislodged by the tongue, like whitening strips. The whitening effectiveness of trays is equal to whitening strips.

The whitening products available in the dental care section of pharmacies, grocery stores, and discount stores fall into the following categories: toothpastes, rinses, gels, and adhesive strips. Products that claim “whitening” are considered cosmetics and are not regulated by the Federal Drug Administration. Therefore, their claims are not subject to verification of effectiveness. All toothpastes can be considered “whitening” because the act of brushing will remove stains. In order for a product to be truly effective in whitening, it must contain oxygenating agents such as carbamide peroxide or hydrogen peroxide. These react with the pigments in the tooth. The longer they remain in contact with the tooth, the better it whitens. Gels work better than liquids and toothpastes. Adhesive strips work better than gel unless the gels can be placed in a tray that adapts extremely well to the teeth. Store bought trays do not fit well. The shelf life of the oxygenating agents is short, which means they could lose their effectiveness before opening. Always check the manufacture and expiration dates. This fact, together with the lack of contact time, is the reason toothpastes are poor whiteners. There are some stains that just won’t respond to whitening. Also, fillings and dental crowns (caps) do not lighten and may appear darker after teeth have been lightened. Whitened teeth may occasionally need to be touched up to maintain the selected shade.

Whitening strips are plastic adhesive strips containing hydrogen peroxide or sodium hydroxide. Several companies presently sell whitening strips in retail stores. As with all forms of whitening: office, home tray, or whitening strips the higher the percentage of the active ingredient the more effective. The chemistry of whitening has not changed for 35 years, only the methods of application. The technique is easy. Just open the packaged strip, affix it as closely as possible to your teeth and wear for at least 30 minutes. If possible, you should brush your teeth first. The disadvantage of whitening strips versus home tray whitening is when teeth are not straight, the strips do not contact all of the teeth uniformly, which will cause uneven whitening. The advantage to whitening strips over home tray is that it is less costly. As with all whitening, it does not lighten crowns, porcelain veneers or fillings.

Several companies make whitening strips, but they were invented by Procter & Gamble Co. in 2000 with hydrogen peroxide. To place whitening strips, dry your teeth with a tissue or paper towel and adapt the strip to your teeth by molding it. Do not play with it with your tongue. It is much easier to keep the strips on the upper teeth rather than the lower teeth. This is because the tongue tends to dislodge the lower one. A custom fitting lower whitening tray made by a dentist stays in place much better than a strip. Whitening strips are more convenient than whitening trays because and it is easier to carry them in your pocket. Custom fitting whitening trays made by a dentist and whitening strips are equally effective. Both need to be worn a minimum of 30 minutes or longer for one week to see obvious results. 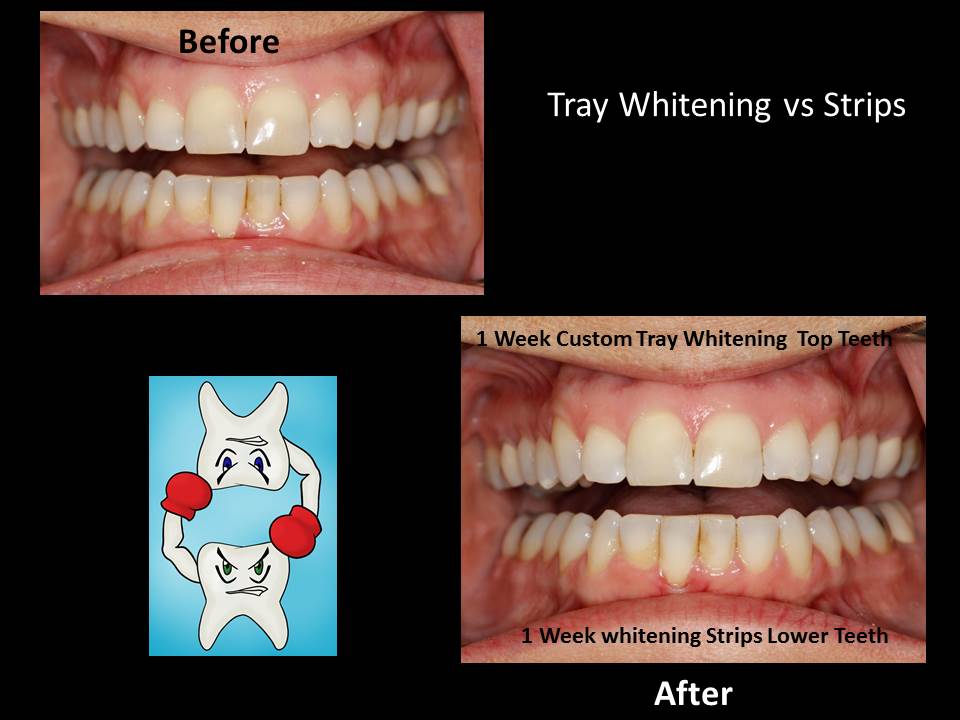 Office whitening is the process of applying a concentration of hydrogen peroxide to the teeth that is much higher than whitening strips or tray whitening. It is usually performed in a dental office, but also available in mall kiosks and tanning facilities. It may take more than one visit to lighten your teeth. This type of whitening has been used for a 100 years usually with a heat lamp. Today some type of light is used to activate the hydrogen peroxide such as an LED light, plasma arc, or laser. Office whitening works faster than tray whitening or whitening strips because it is such a high concentration of hydrogen peroxide. When teeth dry out from lack of saliva they get lighter. When they become rehydrated they will turn darker. You can do this yourself by blowing air on your teeth for 20 seconds and they will become whiter. Some recent studies have indicated that lasers may improve these effects, but most studies show no difference compared to using hydrogen peroxide just by itself. 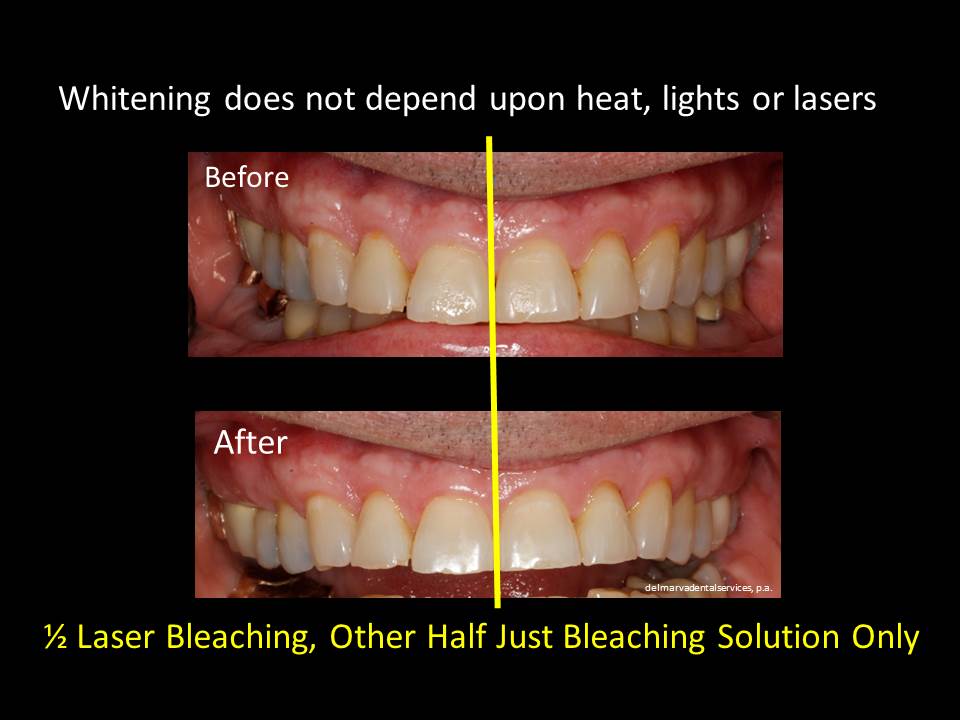 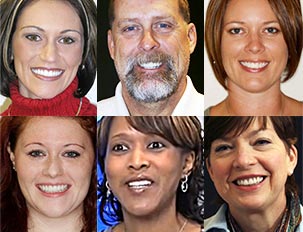